As a baby she was all alone, she was orphaned because her parents died in a brutal war. She was found by her older brother Cinos (keep in mind this is not my character I didn't pick his name) he was fourteen when he found her and raised her until she was sixteen. Even though Cinos is much older than Alpha he didn't like being called father, he preferred the term brother since he didn't age after he turned seventeen. When Alpha was 16 she was taken by Marauder pirates and forced to clean everything. After three years she escaped and stole a ship.

She crash landed on Earth by accident and was discovered by a farmer's son, Ivan. Ivan was very greedy and decided to turn her in after pulling her out of her almost destroyed ship. She was taken to area 51 to be questioned and disected, but 6 hours after she got there she destroyed the base and escaped. Now she is being hunted down by government agents and is traveling around Earth to find a way back to her older brother. She travels alone in fear that if she was with anyone else they would be in danger.

While on the road she met Dr. Ivo Robotnik, she didn't know who he was and didn't trust him at first. He saw purpose for her, since she was a bit more technologically advanced he thought he could use her to help him destroy Sonic and his friends. Eggman was kind to her and told her if she helped him with a small task he would get her home. She agreed and her first mission was to steal the master emerald. When she had stolen it and given it to him she discovered it was all a trick and was locked up and held prisoner. When Sonic and his frineds defeated Eggman she explained her story and Sonic and the others forgave her.

After that she stayed with them for a while, they were very kind to her and wouldn't stop bothering her with questions. The government agents managed to track her down after a few days and attacked, Alpha diverted their attention to her and lured them away. She eventually lost them on snow capped mountains since the snow was so heavy. She was back to looking for a way home.

She's a very friendly person and very outgoing. She has a strong will and is quiet. She's very loyal and has a low temper. She is also easily angered and annoyed.

She doesn't have any powers but she is very acrobatic and knows karate thanks to her older brother. She's very slow but has great upper body strength. But she's not as strong as Shadow.

Alpha uses a spear that her brother made for her when she was 15. It electrocutes people from short or great distances and goes up to 100 volts. It malfunctions on her every other day and shocks her quite a lot.

Interaction with other Characters

This is the first official character Alpha came in contact with. She, at first, saw him as a nice old man. But after the incident she see's him as an evil old man that she would like to lock up for good.

Alpha see's him as rather annoying but nice. He was the only one she would reveal her backstory to and bonded with him. She saw him as an annoying little brother.

Amy was very motherly to her, she taught her about all the different species of mobians there are and taught her how to cook and clean her armor.

Knuckles didn't really trust her at first, Alpha was also most curious about him since she didn't expect echidna's on this planet. She eventually gained his trust when she helped him find emerald peices that were accidentally smashed by Rouge.

Tails helped her repair her spear, but only for a while then it went haywire again. He taught her what to do when it malfunctioned.

These two didn't get along very well, they kept fighting over the emerald whenever Alpha watched the emerald for Knuckles when he took a break.

She didn't interact with the black hedgehog much. They met only once when Alpha was working with Robotnik and all he did was look at her for a brief moment then walked away. 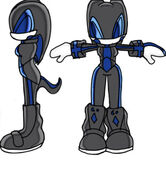 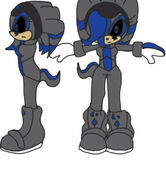 Add a photo to this gallery
Retrieved from "https://sonicsociety.fandom.com/wiki/Alpha_Centuari_the_Echidna?oldid=5775"
Community content is available under CC-BY-SA unless otherwise noted.