Amethyst can can be quite vicious due to her dark dire wolf nature, She Pretty darn stubborn when it comes to stuff espeically when she doen't want do somthing, Quite Scarcastic, But deep inside her heart and soul is someone who is very kind and caring, has a hard time of truely showing how she really feels, Amethyst is a deep thinker at times.

Levitate: Amethyst can Levitate off the ground due to being a chaos emerald, but only for a short while like as long as tails can fly. The only time she's can't levitate if she low on power or if she become's powerless (which never happens inless yo know how to do it)

Chaos Spear: This Move can only be activated with Shadow, due to Amethyst can't activate it on her own. When it activated her body shines brite as well as her eyes and she shoots out of her mouth, the spears.

Chaos Control: This Move can only be activated with Shadow, due to Amethyst can't activate it on her own. When it is activated time stops allowing her and Shadow to seem to move faster then the enemy.

Chaos Blast: This move can only be activated with Shadow due to Amethyst can't activate it on her own. When it is activated her body glows a dark red and releases an explodion that destroys anyone in there path but does not harm her or Shadow.

Amethyst with shadow can munipulate other chaos powers as well but they arn't commonly used all the time.

Dark Strike: Dark strike is a move that the dark dire wolf pack is known for.A shadow aura appears around there hands or somtimes teeth and they strike there enemy with hard blow and inducing a nitemarish sleep. Inless the enemy is destoryed by the strike. This move has been enhanced by the power of chaos which is also used to make the moon turn black or to make shooring stars.

Shadow Kick: Shadow Kick is another move that the dark dire wolf pack is known for. A Shadow like aura appears around there feet and they kick there enemies which traps them in darkness. While the user of this power uses this advantage to finish there enemy. This move has been enhanced by the power of chaos which is used to make stars fall or rocks that were suck in atmosphere causing metorshowers or changing the cycle appearence of the moon.

Blade Tip hair: Amethyst Longest point in the back of her hair, she can used it as a sword without using her hands or feet since it's made like that out of her energy. basicly she uses her mind to control her blade tip hair. Only time when she can't use it is when she low on power or powerless when her hair fall down and becomes unspiked.

Aurora Ball: Aurora ball is one of Amethyst's most powerful attacks since she can summon energy ether within her hands or out of her mouth releasing a energy can can take out many enemies in one shot. Also, when used, it makes a pretty aurora in the sky that Amethyst can run on.

+Loves Bacon. (ever since she was intruduced to it once she awakened from her deep sleep)

+Some of her abilities require her Chaos Connection

+Shadow is her Chaos Connection

+Likes Shadow more then a friend and a partner.

+Fur slightly glows at night when she's using her powers

+Eyes will glow when using power

+Amethyst Has a violet Chaos ring around her neck

+Amethyst hair will go straight down if her power is really low. (making it look like a layer hair style)

Amethyst Only goes in her Chaos Emerald form when she gets put into a deep sleep and will stay in this sleep till she awakes. Then she will transform back into her true form. This does not Happen Every time she sleep just when The Master emerald put her into this deep sleep. Even when she's in a deep sleep her power can be harnest like all the other chaos emeralds. Amethyst In this form can glow or become a super Chaos emerald. 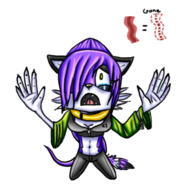 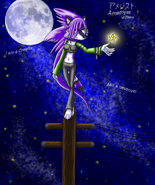 Add a photo to this gallery
Retrieved from "https://sonicsociety.fandom.com/wiki/Amethyst_Of_Chaos?oldid=9314"
Community content is available under CC-BY-SA unless otherwise noted.