Charm the Hedgehog is a Fan Based Character created by http://coolanaangel.deviantart.com

Charm was born in Soleanna Castle Town during a time of recent scientific discovery. The government had recently discovered about a sudden leap in the population of Mobians with unique abilities, whom they called, MetaMorphs. When Charm was born her father, Rolan the Hedgehog and her mother, Haven the Hedgehog, were ecstatic. But, when Charm turned three she began to show signs of being an Elemental MetaMorph. Her eyes turned from blue to gold and whenever she was upset, a light bulb would explode or an electrical item would malfunction. Rolan began to resent his daughter while Haven continued to adore on her. A couple years later, a group of scientists made an announcement that they could take MetaMorphs out of the hands of their parents and put them to good use. Rolan immediately jumped at this new opportunity and sent Charm to the nearest lab. Charm was experimented on for the next several years by scientists who preformed inhuman and cruel experiments. The scientists ended up enhancing Charm’s powers in the end. She could now control electricity, shoot lightning bolts, and fly and she was now considered a Class A Elemental MetaMorph. The government soon shut down Project MetaMorph (due to lack of support and several law suits against the Project) and sent the MetaMorphs home.

Charm never returned home. She ran away and found refuge in GUN (Guardian Unit of Nations) by becoming an agent at age 14 and soon making her way up to becoming a Special Agent. She often worked with Lily the Hedgehog, Daria the Hedgehog, and sometimes, Shadow the Hedgehog. When Charm was 15 she decided to return home and talk to her parents after not seeing them for ten years. When she returned home, she walked into a fight between Rolan and Haven. Rolan, being known for becoming violent during fights, advanced on Haven with a knife. Charm tried to intervene but Rolan hit her upside the head with a metal pot and she was knocked out. When she awoke she discovered that Rolan had killed Haven when Haven was trying to protect Charm. Rolan was not charged with murder by claiming that Haven committed suicide by stabbing herself repeatedly. Rolan then went into hiding to escape Charm’s want for revenge. Charm has not found him and she continues to look when she can.

Charm's powers allow her to control the electricity in all electronic devices. She can summon lightning by forming a small storm around her. Though the lightning isn't powerful enough to kill someone or seriously injure, it can leave them out of commission and/or stun them. Her strength is in offensive attacks rather than defense.

When charm met Shadow the hedgehog he teached her special powers. She can now control lighting,thunder and other electrical powers all though when ever she gets distracted during a battle she looses focus on what she was doing. Charm is a character that gets distracted very easy, she also can control fire powers but only when she has the Orange or red chaos emerald.

When Charm has all the Chaos Emeralds she turns into Super Charm. Rather than turning golden with red eyes, her fur turns silver and her pupils almost disappear. Super Charm can create a complete storm and uses it to enhance her attacks. Rather than in her normal form, she does not get as winded if she uses her lightning bolts excessively and she can fly a lot longer.

Charm is a quite, reserved, and somewhat shy individual. She only opens up to her true friends. She tends to stay away from others and is sometimes considered mysterious. She prefers to work alone, not liking to rely on others for help. Charm loses her temper with people who get on her nerves or with people who she simply cannot stand. She is very impatient and gets irritated when she doesn’t understand something or if she can’t do anything. She feels guilty that she allowed her mother to be killed. She’s not flirty or outgoing at all, making her dislike people like Rouge somewhat. Charm is very kind and considerate but it can take some work to get her to open up. She is most comfortable around Lily, Daria, and Diesel.

Relationships with other Characters

Charm first met Diesel when she was helping her friend, Hestia Pyro investigate her mother's sudden and bizzare death. Hestia suspected her cousin, Diesel because of the bad reputation he has with his family. When Charm first saw Diesel, she hated him, thinking that he was responsible for the death of Hestia's mother. She became aggrivated by his persistance in denying he had anything to do with the murder and the two battled. Diesel, who is also able to control electricity, was evenly matched, much to Charm's suprise. Hestia soon convinced Charm to stand down and asked Diesel for his help in discovering who killed her mother. Diesel agreed and the three of them set out. As they continued to travel, Charm grew to like Diesel more and more. He, in the beginning, admitted that he had feelings for her. But, Charm did not return those feelings. After helping Hestia discover who killed her mother, Charm returned to GUN and Diesel soon became an Agent. The two spent more time together and Charm began to have feelings for Diesel as well. After having met four months prior, the two began to date. Charm now considers Diesel her best friend and she loves spending time with "The Sherlock Holmes of the 21st Century."

Charm first met Shadow when they were partnered up for a mission for GUN. Shadow found her attitude incredibly annoying at first and felt like she didn't listen to orders when she needed to. Charm was irked by his arrogant and proud demeanor and was harsh right back at him. Commander Tower continued to send the two of them on missions (despite their complaints) over the course of several months. Charm eventually revealed to Shadow that she ran away from home and he responded without much emotion. Shadow eventually began doing his own research on her and found out that she is an Elemental MetaMorph. He began questioning her about what the scientists did to her but she didn’t want to go into detail. He became more intrigued by how she obtained her powers and the two started spending more time together. She told Shadow about what her father did and Shadow looked into it, finding out that Rolan committed suicide one month after he killed Haven. After Shadow told her, Charm was incredibly angry that justice was never served and left to brood. A while later, Charm asked Shadow to help her find out what the scientists wanted to do with the MetaMorphs and he agreed rather reluctantly. The two found some documents and papers in the abandoned lab she stayed in and discovered that they were to be used as WMD (Weapons of Mass Destruction) for the government by the use of some mind control. Shadow left Charm to be alone after their discovery. Though they aren't "friends" exactly, they've gotten past their differences and consider each other allies.

Lily the Hedgehog is considered Charm's best friend. They met before Charm was sent away and they later found out that Lily was also an Elemental MetaMorph but was never sent to a lab. When Charm returned to Soleanna and became an agent for GUN, she found that Lily had also become an agent. The two work together for almost every mission and Lily is one of the few people who Charm trusts completely. Lily knows when to leave Charm to herself and when to go comfort her if she is down. Lily is a member of Team Tempest. She is power on the team.

Daria the Hedgehog is Charm's second, and last, best friend. The two met at GUN when Tower partnered them up and they almost instantly clicked. Daria is another Elemental MetaMorph and was sent to a lab for a short period of time. Despite this, Daria's happy and opptimistic attutide can get Charm out of her bad moods. She always makes Charm smile and laugh. Daria helps Charm out by offering her a shoulder to cry on or a good time when she needs it.

Charm first met Madame when she was walking through Soleanna Castle Town. The two instantly hit off and Charm soon discovered that, due to her relatives, Madame didn't have anywhere to stay. Charm offered for her to stay at her home and Madame agreed. Madame eventually shared the truth of her tortured past with Charm and how her parents are hunting her. Charm agreed to help Madame and, together, the two defeated Madame's parents. Since then, Charm and Madame have been close friends and they rely on each other.

Charm and Hestia first met at GUN in the training facility. The two instantly hit off and soon became fast friends. The two worked on a mission together to bring down Hestia's arch enemy, Luna the Hedgehog. Together, the two suceeded and they continued to work together. Though, they dont see each other as much, Charm considers Hestia to be one of her close friends.

Charm's relationship with Rouge is past rivalry. Charm cannot stand Rouge's ostentaious and flirty attitude and Rouge cannot stand Charm's reserved and impatient attitude. Charm is somewhat jealous that Rouge works with Shadow more often while Rouge is jealous that Shadow is closer to Charm. The two constantly argue and insult each other. They try to stay away from each other as much as possible.

Veshae the Vulpix is Charm's biggest and most challenging rival. Veshae is able to control and manipulate fire, both Dark and Light. The two are complete opposites and they only share a short temper and their competitiveness towards each other. She met when Veshae was running from a cop in Station Square and set Charm's hair on fire by accident. Charm immediatly demanded why Veshae, a "petty criminal", was being chased by a cop. Veshae claimed that she was only having fun with the cop by lighting his hat on fire. Charm lost her patience with the Vulpix and told her to leave her alone. Veshae is angered by Charm's disbelief and starts to pick a fight with her. The cop tells them that they can't fight in Station Square (and tells Charm to stomp Veshae into the dust). The two agree to fight at Green Hill Zone later. The two meet and instanlty start to battle. After pushing each other to the limit, Veshae declares herself victorious and asks Charm to be her rival. Charm agrees and warns her that she won't go easy on her next time. Veshae responds by setting her quill on fire again and tells her the same thing before running of. From that day on, Charm and Veshae have remained rivals.

Charm has only met Sonic a few times either due to Shadow and Sonic's famous rivalry or working on the same side of Sonic to defeat Dr. Eggman. She found his cocky and arrogant demeanor very annoying. Eventually, she began to get used to it and started repecting him more. The two hardly ever see each other, however.

Charm and Lily, already being very close, are on a mission to stop the latest Metal Sonic created by Dr. Eggman. The two are surrounded by a pack of Eggman's robots when Daria shows up. The three quickly take out the robots and Lily was fascinated by Daria and quickly got used to her. The three agreed to go together on their mission and thus begin their adventure in Sonic Heroes. 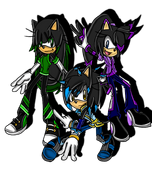 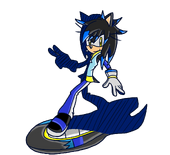 Team Celestial- Sonic Adventure
Add a photo to this gallery
﻿
Retrieved from "https://sonicsociety.fandom.com/wiki/Charm_the_Hedgehog?oldid=9184"
Community content is available under CC-BY-SA unless otherwise noted.