Born in the future, 165 years later from the present time. The daughter of Queen Alyce the Hedgehog and Zash The Crimson Rogue; Kinomi, or by her real name, Sapphire, was a unique child as she was born with a ageless symptom by her father's nanties and having a rare pigment on entire appearance. When she was a young infant, she was taken away through time by her father, with a Time Stone, to seek for her sanctuary from the upcoming dangers of her mother's ex-husband and assassin, Quicksilver Hedgehog. For years, the young girl has been raised by her 'foster father' ,who was really the dad in a younger age, with his companions, Adelle and T.I.M.( http://fav.me/d3bf6fo ), right after she was found in the alley, crying. However after awhile, they weren't unable to take care of her, so she was sent to a clan school on where she learns how to fight, Martial Arts. Training to be a top student in the school, although she has been teased and bullied by others just for her species and appearance, which develops the shy personality as she grows older. When she was in the Master's room, for hurting a delinquent to defend herself, she discovers a golden detailed box hidden behind the torn wallpaper. Inside was a black sash, old looking and Kinomi wasn't in interest by it, and soon ended up being attacked by this possessed sash. Kinomi thought she heard voices from somewhere else; Actually hearing the sash's, Telepathically when touched. Kuros was the name he announced. Luckily, the sash was unable to psychically harm her because of his eternal curse. They become partners right away, since Kuros can’t go anywhere without motive support from a pure-hearted person. The day of her 12th birthday, unexpected enemies attacked the small village, in search of a young girl. She escaped as soon as possible, thanks to her Teacher, Alexander, but was later lost in the forest. As her friends and neighbors were slaughtered, this event has horrified Kinomi ‘Sapphire’ in her memories, every birthday, regretting if it was her fault. Kinomi ‘Sapphire’ disappeared from the world itself. At age 15, she has been kidnapped by Ivo Robotnik‘s blue robot, Metal Sonic, from a identification mistake as Amy Rose. After she was saved by Sonic and Tails, her new adventure awaits and finds her true self as well, the Princess of the Future. 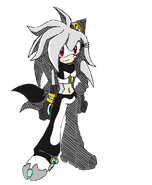 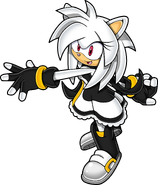 Add a photo to this gallery
Retrieved from "https://sonicsociety.fandom.com/wiki/Kinomi_%27Sapphire%27_The_Hedgehog?oldid=6811"
Community content is available under CC-BY-SA unless otherwise noted.