Born in Soleanna after the events of Sonic 2006, Shimmer grew up happily as a single child without any problems. Ever since she was little, she's been using for powers to help people. Whether it's helping out a friend or helping stop criminals, you'll find her there. Not having many friends with powers like her, she decided to train herself most of the time which didn't work out sometimes. At the age of 14, she was helping out one of her friends who happened to be a scientist. Her friend was making portal to travel in time. While helping out with the machine, the portal was accidently activated and Shimmer got sucked into it before closing. Dazed and confused, Shimmer found herself lost and alone in a place she knew nothing about. She traveled a good distance before coming across two heroes, Silver the Hedgehog and Blaze the cat. She quickly befriended them and they explained to her that she was in the future in Crisis City. Not having anywhere to live and not knowing how to get back to her time, Silver and Blaze offered to help her out to which Shimmer was ever grateful for. They told her that the only thing that could send her back to her own time was the chaos emeralds. Shimmer at that time didn't know what they were so they explained that to her as well. After that, the trio spent the next few months going around and gathering up the chaos emeralds. Shimmer came to realize something on their quest. Everytime she would be getting close to a chaos emerald, she could make her eyes and hands shimmer. Normally the only thing that happened to her was sparks of shimmer forming at her feet when she ran. Also, when attacking, a little bit of shimmer would form at her hands/feet the moment her punches/kicks had contact with the thing she was attacking. While on the journey, Shimmer came to admire how agile Blaze was. Silver took notice of this and told Blaze she should give Shimmer some pointers of not train her a little. Blaze was hesitant, but eventually agreed and offered Shimmer her help. Shimmer was extremely happy and was taught by Blaze the remainder of the journey. Soon the seven chaos emeralds were collected and they had a sentimental goodbye before Silver sent Shimmer back to the present. Upon arriving, all of Shimmer's friends and family were both beyond shocked and excited to see her again. They had been worrying they'd never see her again or if she was even alive. Now the age of 16, Shimmer had become agile like Blaze and kicking was on her strong side. She has no love interest but feels happy either way. 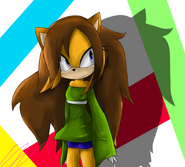 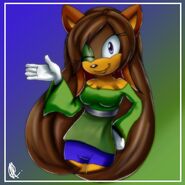 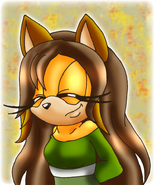 Add a photo to this gallery
Retrieved from "https://sonicsociety.fandom.com/wiki/Shimmer_the_Hedgehog?oldid=8306"
Community content is available under CC-BY-SA unless otherwise noted.