Likes: Thunderstorms, Rain and her Occupation.

Quote: I've never played inside as a kid, even in the rain i'd go out

Tanzanite (Tanza) the Cat was brought up in a military installation to her parents Tanya and Zachary Cat. Her parents both played parts in the G.U.N company, her mother being head of a department that trained new recruits and her father being a soldier. She was raised around the idea of being strong, courageous and determined at all times but often could not succeed in being fit enough to fight as her father had. Leaving her frustrated. Long after her training it was decided that her abilities were more suited to a Spy rather than a soldier and because of this she often crosses paths with Rouge the Bat on her missions. The two tolerate each other but will occasionally fight if there is something to be recovered. Tanza very rarely gets into fights as her physical strength is very meak and the only defence she has is the power she has over electric currents. This being rather small but enough to defend her when needed. Two years after her first mission Tanza's father went missing on an escort mission to take a strange jewel found by G.U.N to a safe and more secure location. Tanza spent much of her time straying from her missions in order to find clues of her fathers location, the only clue she had was a name given to her by one Sonic the Hedgehog, when he overheard her asking questions of the strange jewel her father had found, this being 'Dr Eggman'. The two went their seperate ways but were reintroduced when Tanza located Dr Eggmans base and was confronted with the scientists robots which chased her off and left her battered. She soon returned with the help of Sonic and rescued her father, who gave the jewel to Sonic and his friends as a thank you for the rescue and for helping his daughter. Tanza returned home with her father and was informed by him that the strange powers over electricity she posessed could have had something to do with him, who often had a strange sense of currents and other electric energies himself. Tanza leaves soon after and does not see her parents for many years, fearing for their safety if she were to return now that Dr Eggman had witnessed her powers. She does however, carry a small photograph of them in her pocket everywhere she goes, so as to not forget her home. Tanza now spends her days away from the G.U.N headquarters, gathering information about the possibillity of where her powers came from and the strange jewels that seem to be so interesting to the Doctor that kidnapped her father.

Tanza is generally quite a calm person, she tends to listen rather than speak herself. However, she is insanely determined and will do whatever it takes to accomplish her goal. She has few true friends and will protect those she has to the very end. She prefers to hang with the boys as she finds girly girls very annoying. She is also very logical and clever. Often finding ways out of situations that seem to be hopeless. This is sometimes her downfall as she believes she can figure out things others can't.

Tanza is not very physically strong, she is rather small and her only resolves is her ability to get out of situations quickly, either by using her swiftness or her intelligence. She has a small amount of power over electricity which can leave enemies stunned or can simple light up dark places when needed. She sometimes also uses this power as a quick way to shut down computer systems in a hurry.

Sometimes when Tanza is angry or frustrated, sparks can be seen flickering around the lightning bolt shaped tufts on her head and her tail.

Tanza has only ever met Sonic twice, once when asking questions in a market about her father, then a second time when he helped her to rescue her father, she has a profound respect for him and would aid him if she were ever needed or he were to ask, as a thank you for aiding her in the rescue of her father.

Tanza and Rouge tend not to get along, they often cross paths because of their equal status as Spies for G.U.N.. Tanza is slightly envious of the fact that Rouge works with Shadow the Hedgehog whom she has heard contributes to her success on missions frequently, she feels she is cheated with the fact she is required to work alone.

Tanza only came across Amy when she and Sonic met in the marketplace, Amy instantly threw accusations at her saying that Sonic was cheating on her with 'This scrawny cat girl' and Tanza quickly avoided the situation by saying Sonic and her were mearly sharing information. Amy eventually realised that Tanza was no threat to her relationship with Sonic and bid her a polite goodbye before skipping off.

Tanza and Knuckles relationship at first was very unstable, Knuckles once discovered Tanza on Angel Island mystically studying the Master Emerald atop its temple, while searching for her father. She was immidiately set upon and threatened that if she did not leave Knuckles would have to fight her. She explained that she only wanted information and refused to leave, Knuckles attacked Tanza and was only stopped by the reflex Tanza developed of putting up her hands in defence and shocking her opponents when they went for her. She told him that she meant no harm and only wanted to ask him if he knew about the jewels because of her missing father, and shed a few rare tears. Knuckles took pity on her and told her the jewels were Chaos Emeralds and explained their purpose and power.

Artemis is a friend of Tanza's whom was also part of the G.U.N team. However, his abilities were more suited to that of fixing machinery and using computers. Tanza and Artemis have known eachother for a long time and even though Tanza is eight years older than him, she is very patient with his excited ways. Valuing his skills and often returning to him for help. Artemis often asks Tanza if he can accompany her on her missions with her answer always being 'When you're older' followed by a deep sigh from the young Lemur. 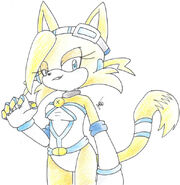 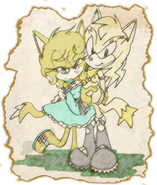 Add a photo to this gallery
Retrieved from "https://sonicsociety.fandom.com/wiki/Tanza_The_Cat?oldid=5134"
Community content is available under CC-BY-SA unless otherwise noted.